The History of AXL …

( Not only pioneers in the industry, we wrote the book )

In 1938, Mr. George E. Newton had an idea; a vision if you will. While working with the Douglas Company as a purchasing agent, he identified a need for the inspection of castings before the machining process. He believed that he could x-ray castings and eliminate the bad parts prior to incurring the expense and spending the time allotted in the final machining process. It was from this very vision that Aircraft X-Ray Laboratories came into being. 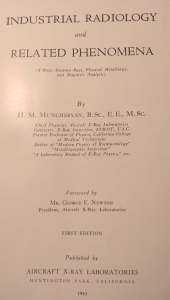 George Newton talked to many people about his idea to create this much needed service company and then acquired his first x-ray machine from a gentleman named Harvey Bates, who later joined the Aircraft X-Ray staff. Also on staff was Dr, Muncheryan among several other persons that saw and believed in this innovative idea that Mr. Newton had a passion for.

The first plant was a small garage off of Slauson Ave. in Huntington Park and the x-ray machine was referred to as a “Hay Rack” type machine. There was a story that Mr. Newton told numerous times of how AXL started and almost stopped doing x-ray. The story went like this … One day after a short time in business of x-raying castings for the Douglas Company, George noticed a casting that had been inspected and accepted by his company and being readied for shipping back to the customer. There was a very large hole in the casting that he could see visually and yet it did not appear on film. George told his film reader and the x-ray technician to x-ray that part to see the defect. He said he had enough capital for one more box of film and that if they could not find the defect by the time they used up that last box, he would stop doing x-ray. So, after many shots and much film used, he was able to tweak the technique to show such defects.

Aircraft X-Ray is still here and still operating diligently to find every negative indication on all castings inspected. According to George, that incident showed him the need for proper techniques and being able to “see all of the material”.

Mr. Newton later moved his company to 5216 Pacific Blvd., Huntington Park, California in 1940 and continued to grow the business. During World War II, his company expanded enough to facilitate multiple locations. Aircraft X-Ray Laboratories opened four additional x-ray plants; one in Wichita, KS, one on Dallas and Fort Worth, TX, and also one in New Orleans, LA. 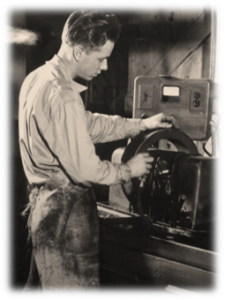 Additionally, Mr. Newton also opened two Magnetic Particle inspectionplants in Los Angeles county; one on 7th Street in Los Angeles, and one on the corner of 57th Street & Pacific Blvd., also in the city of Huntington Park.

Now, after experiencing such phenominal growth in such a short time, the end of the war slowed the wartime production of aircraft parts down to a trickle. Like many other companies during this time, Aircraft X-Ray had to reduce its workforce and close many of the out-of-state divisions. The Fort Worth facility was maintained for many years as a small unit and was then forced to close in the mid 50’s.

During the period of 1946 thru 1951, George tried many different business ventures to keep Aircraft X-Ray going. He made folding boats, he made exercise machines, he made house trailers, he made records for the recording industry, just to name a few. George also started a foundry in Burbank and then expanded it to the South Gate facility which he acquired after the war. At various times the South Gate facility also housed missile x-ray, portable gamma ray, ultrasonic inspection tanks, pattern making machines and x-ray machine repairs led by Harvey Bates.

As you can tell by now, George Newton was quite the visionary. He recognized the potential for a foundry, machine shop, metal finishing and inspection company being a logical combination with the ability to function as a unit and be profitable. Due to the fact that George was always at least 20 years ahead of the industry, he was not able to make the concept work fully; at least not then. He continued doing x-ray inspection from many sources producing castings and welded products.

In the early 50’s, Mr. Newton added and anodize and painting department in a small building on 53rd Street in Huntington Park, behind the x-ray building. This unit continued to expand and during that time Mr. Don Kautz joined the staff and brought a tremendous amount of work to AXL. 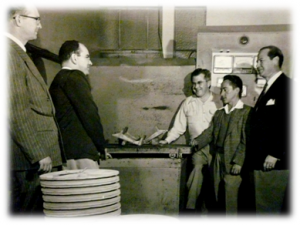 Just prior to Mr. Kautz’s arrival, Mr. Newton purchased two buildings to the north of the existing facilities which were originally built for the Raber Foundry during WWII. Mr. Raber and George were very close friends and they had agreed for many years that should either company ever decide to sell their properties, they would give each other the right of first purchase.

AXL built almost all of their own x-ray machines as well as the entire penetrant and magnetic particle inspection department set-up. It was a truly magnificent sight to see the explosive growth of the company and the extremely competent people employed by AXL. Eventually, the entire company was consolidated into one block long facility we still occupy today.